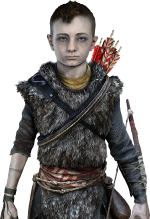 Atreus is Kratos' son and the deuteragonist of God of War.

Atreus was born to the Greek god Kratos and the giantess Laufey (although Kratos knew her only as "Faye", and believed her to be mortal). Faye wished to name the boy "Loki", but agreed to name the boy Atreus in honor of a soldier whom Kratos fought alongside and respected.

Both parents kept their true nature hidden from their son, and Atreus grew up believing himself mortal as a result.

Faye eventually died of an unknown cause, with her final wish to have her ashes scattered from the highest peak in the Nine Realms.

Atreus is a curious and intelligent boy, displaying courage and resilience if not the best instincts.

Due to his age, Atreus often lacks control of his emotions, and his demeanor shifts several times along the journey as a result.

Due to Atreus's youth, his divine powers are still emerging

In Norse mythology, Loki is the god of mischief, often portrayed as both an enemy and ally to the Aesir. He is the father of Jörmungandr and Hel.

The name "Atreus" refers to a king in Greek mythology of the same name.